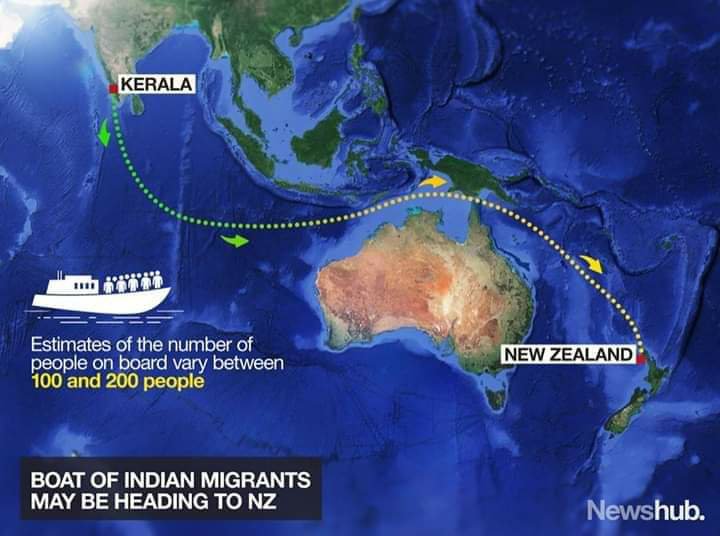 A group of 105 people from Delhi are likely to have left for Australia in a fishing boat from Munambam harbor near Kochi in January, according to new information released by the Ministry of Home Affairs.

Though the ministry did not confirm the destination of the suspected illegal emigrants, it put the number of people on the boat at 105, up from the 80 reported earlier.

However, the ministry has not been able trace the boat and its passengers even after six months — suggesting that either they reached their destination safely or were swallowed up by the sea.

“The Indian Coast Guard launched an intensive search operation to locate the boat using ships, hovercraft and aircraft. Information related to the case has been shared with the Interpol and other agencies in order to locate the missing boat and its occupants.

“No information about the whereabouts of the boat has been received as yet,” the ministry said.

This has prompted some of the relatives of those onboard have approached the police in Delhi’s Ambedkar Nagar and filed ‘missing person’ complaints.

Investigations by Kerala Police have revealed that the group of people stayed in the temple town of Chottanikara, also near Kochi, and in the beach town of Cherai, before leaving on the journey.

The police suspect that the passengers were economic migrants from Ambedkar Nagar in Delhi, who were looking for a better life in Australia and believed that they could cover the 6,000 km distance in a fishing boat.

The police have identified most, if not all, of the occupants of the boat.

No reports of any of the emigrees contacting their relatives back home has come to the notice of the authorities.

Fishermen from Kerala cover thousands of kilometers in their fishing trawlers.

However, it is believed that it would be almost impossible to reach Australia on a boat non-stop as the boat would run out of diesel in six days.

Earlier attempts to reach Australia from Munambam — which is also a ship building center — have focused on trying to refuel the boat mid-way, in either Malaysia or Indonesia.

The police have arrested the person who arranged the boat for the group.

Published by Complaint against Fraud